"Religious Dynamics in History and Present"

Written by Yanti Hölzchen on 11 December 2020. Posted in News 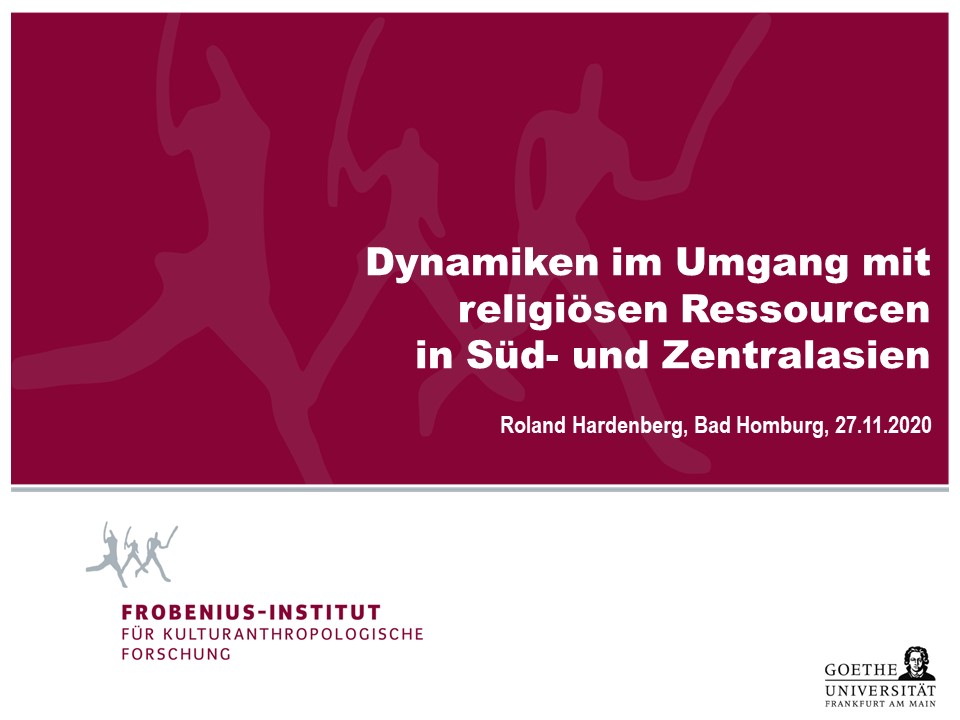 A group of scholars at Goethe University Frankfurt jointly investigates the theme of "Religious Dynamics in History and the Present" as a research alliance hosted at the Forschungskolleg Humanwissenschaften Bad Homburg, with the participation of Roland Hardenberg, Director of the Frobenius Institute.


On November 27, 2020, a first joint (virtual) event started with lectures by Prof. Dr. Hartmut Leppin, Prof. Dr. Thomas Schmidt, Prof. Dr. Christian Wiese and Prof. Dr. Roland Hardenberg.
The topic of the lecture held by Prof. Dr. Roland Hardenberg was: "Dynamics in dealing with religious resources in South and Central Asia". In this talk, Roland Hardenberg presented the contents and results of a research project on religious resources funded by the SFB 1070. Based on the resource concepts and analytical tools of the SFB 1070, this research project makes an empirical as well as theoretical contribution to the topic of 'religious economics'. This means that the embedding of religious practices and ideas in specific economies of different societies is illustrated and the dynamics of the interplay between religious and economic practice is investigated on the basis of specific empirical examples. In each of the three phases, the project addresses religious-economic resource complexes with different emphases.

The first phase of the project focused on those resources which various religious institutions need to emerge, sustain themselves, and change. The religious knowledge (ilim) disseminated in mosques and madrasas in Muslim Kyrgyzstan, the sacred food (mahaprasad) produced, distributed, and consumed in the Grand Temple of Jagannathas by Hindus in Puri, India, and the numerous endowments (waqf) of the important Shiite shrine of Imam Reza in Mashhad, Iran, were examined.

In the second phase of the project, the commercialization, medialization, and commodification of speeches by religious specialists as a resource formed the focus of the three case studies. The different dimensions of religious teachings were explored using the example of prominent Muslim preachers (imams) in Kyrgyzstan, important representatives of two monastic Hindu traditions (Gobardhana Pitha and Ramakrushna Mission) in eastern India, and priests of two competing Christian churches (Jeypore Lutheran Evangelical Church and Pentecostal Church) in the highlands of Odisha, India.

In the third and final phase, which is currently in the application process, the project will focus on the resource dynamics of religious (material) things, which are not only used by specific religious institutions and specialists, but are important religious resources for almost all people, are part of daily (survival) life and are determined by the interests of a wide range of actors: rice and wheat. In South and Central Asia, these cereals combine religious with (agro-)economic ideas and practices and therefore offer a suitable starting point to address issues of "religious economics".