Written by Keuner on 13 September 2006. Posted in Institut 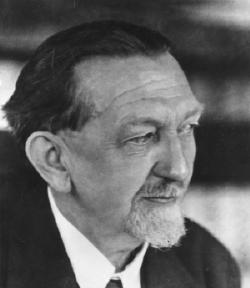 Leo Frobenius was born in 1873, the son of a Prussian officer. He left school without any formal qualifications, but inspired at a very early age by the great German Africa explorers (Heinrich Barth, Gerhard Rohlfs, Gustav Nachtigal, Georg Schweinfurth), as well as the most important ethnographic museums of that time in Bremen, Basel and Leipzig; these were his real ‘universities', at which he worked as a volunteer. When his lecture on African secret societies - rather unorthodox for his time - was rejected by a German faculty, he resolutely distanced himself from university life and went his own way.

Aged just 25, in 1898 he published his first scientific work, ‘Origins of African Cultures' (1898), and in that same year, with only minimal funding, he founded an research institute for Africa, the Afrika-Archiv, in one modest room in Berlin, containing a library, quite remarkable for that time, and his own collection. In 1904 Frobenius undertook his first research expedition, which took him to the Kasai Region (Congo). This was followed without interruption until the beginning of the First World war by trips to West Africa, including Nigeria, the Sudan and the Maghreb (see "Research Expeditions").

In 1920 the Afrika Archiv moved to Munich, where it became the Institut für Kulturmorphologie. Only with the move to Frankfurt in 1925 did Frobenius finally obtain a secure financial basis for his institute, which until then had been maintained mainly by occasional private sponsors.

In 1932 he was appointed Honorary Professor at Frankfurt University and in 1935 became Joint Director of the Städtische Museum für Völkerkunde. In his years in Frankfurt he organized five more research expeditions to Africa (Sahara, South Africa), focusing mainly on the documentation of rock art (see "Rock Art Archive"). Frobenius died in 1938 in Biganzolo (Lago Maggiore, Italy). Since 1945 the Institute has borne the name of its founder. Frobenius was one of the most influential and eminent ethnologists of his time, already intensely controversial during his lifetime. His collection of ethnographic data and oral traditions enjoys general recognition, as well as the comprehensive documentation of African rock art, in which he saw a kind of ‘Picture Book of Cultural History'. One of the first Europeans to do so, Frobenius recognized the historicity of African cultures. He thus became a principal reference for the protagonists of 'Négritude', who aimed at re-establishing the cultural self-awareness of African peoples.

The results of his research travels have been published in over 50 books and numerous articles. Most of his field notes and the visual documentation (drawings, watercolours, photographs) he created together with the artists who joined him on his expeditions have been preserved and are kept in the Frobenius-Institut's archives.